Upper Kamenjak is situated between Premantura and Volme.

Upper Kamenjak is situated between Premantura and Volme. It is an area of exceptional landscape value which includes a variety of habitats. From pastures of sage and garrigue, to holm oak maquis and Allepo pine forests, this area offers unforgettable views. Since 1996, Upper Kamenjak has been protected as a significant landscape, and research has shown that the area is floristically extremely valuable. As many as 487 different plant species have been recorded at Upper Kamenjak. Such a large number of plant species in a relatively small area indicates a high degree of biological diversity. At Upper Kamenjak, an annual grass species Catapodium pauciflorum was recorded for the first time for the flora of Croatia in 2012. 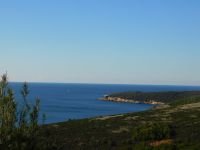 A Place for a Walk, Field Trip and Recreation

The area is ideal for walking, cycling and outdoor recreation. Signposts and information panels provide you with additional information on this protected area that reveals its remarkable nature, palaeontological remains and historical heritage hidden in many remains of the era of the Austro-Hungarian Empire. The remains of the Austro-Hungarian military facility, the Gomila artillery battery, have become a shelter for the most significant maternity colony of bats in the south of Istria with 7 different species.

A lesser-known but very interesting fact is that during World War One gigantic searchlights were deployed in the area of Upper Kamenjak. The searchlights were used as a decoy for the naval port of Pula, which was the main target of the Italian Air Force. Attracted by the bright lights, Italian pilots would then think they were bombing Pula. You can only imagine what the locals of Premantura thought about the people of Pula at that time. 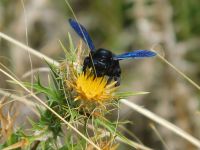