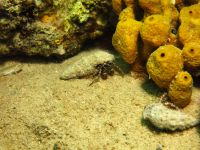 A Look Below the Surface

The undersea world of the southernmost part of Istria along Cape Kamenjak is morphologically very diverse and interesting. Many islets, coves, shallows, and various depths and types of seabed ensure a remarkable diversity of habitats and organisms. In the water, we find different types of seabed from the coast to deeper parts of the sea: reefs, rocks, sand, pebbles, and mud in the deepest parts. The area borders the deeper, open waters of the Northern Adriatic, so constant and strong currents provide an exchange of water masses and a constant inflow of fresh seawater. The maximum depth here exceeds 50 metres, which is also the greatest depth of the Northern Adriatic. On the other side of Cape Kamenjak, the inner parts of Medulin and Pomer Bay are serene and protected areas. The shallow coastal parts of some enclosed coves are rich in fresh water sources that supply nutritive salts from the mainland, promoting the greater production of organic matter in the sea. Such environmental conditions have helped in the development of very rich and abundant undersea flora and fauna.

The infralittoral zone is home to a well-developed community of photophilic algae, characterised by distinctive diversity. The community is widespread from the surface to a depth of around 20 m. The most recognisable species are the peacock's tail (Padina pavonica), many species of Cystoseira
(Cystoseira adriatica, C. barbata, C. compressa...), the mermaid's wine glass (Acetabularia acetabulum) and many others. Neptune grass (Posidonia oceanica) communities occur on many sandy substrates. The communities of this seagrass are one of the most important ecosystems of the Mediterranean due to their high production and their contribution to the prevention of coastal erosion, and they also serve as a nursery, hatchery, habitat and shelter for organisms. The seabed of the sheltered parts of Medulin Bay is sandy with mud. On such substrate, lesser Neptune grass (Cymodocea nodosa) develops. The community is rich in macro-fauna, from crustaceans and echinoderms to different groups of molluscs. The most prominent among them are bivalve molluscs, and, lately, particular attention has been devoted to the noble pen shell (Pinna nobilis) due to its mass mortality throughout the Mediterranean. The populations of the noble pen shell on Kamenjak are still perfectly healthy and as such are one of the last populations of this species in the world. 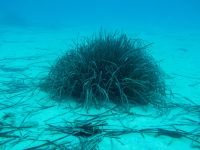 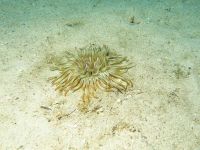 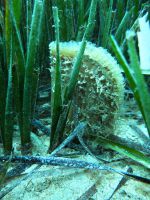 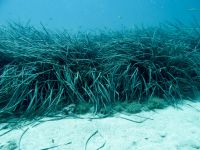 Some of the fish species that inhabit the coastal strip are the common two-banded seabream (Diplodus vulgaris), the annular seabream (Diplodus annularis), the sharpsnout seabream (Diplodus puntazzo), the white seabream (Diplodus sargus sargus), the striped red mullet (Mullus surmuletus), the red-black triplefin (Tripterygion tripteronotus), the tompot blenny (Parablennius gattorugine), the damselfish (Chromis chromis), the painted comber (Seranus scriba) and the Mediterranean rainbow wrasse (Coris julis). The gilthead seabream (Sparus aurata), the European sea bass (Dicentrarchus labrax), the common dentex (Dentex dentex) and the flathead grey mullet (Mugil cephalus) predominate in slightly deeper waters, while the European conger (Conger conger) lurks to strike its prey from holes in and amongst the rocks. It is also common to encounter some crustacean species such as the European lobster (Homarus gammarus) or the warty crab (Eriphia verrucosa) in shallow water when diving. However, the best-known crustacean of this area is by far the spinous spider crab (Maja squinado). A long time ago, during the Republic of Venice era, the meat of the spinous spider crab was highly appreciated and expensive, and at one point the famous writer Ernest Hemingway praised this delicacy. Today, these crabs are much less fished and a closed period for fishing them lasts from 1 June to 30 November. It is worth noting that all sports and recreational fishermen are prohibited from harvesting not only spinous spider crabs, but all other crustaceans as well.

Two Hundred and Thirty Individuals of the Bottlenose Dolphin

So far, the marine areas of the municipality of Medulin have not enjoyed adequate protection. However, by assigning responsibilities for the management of marine Natura 2000 sites to the Kamenjak Public Institution, the first step was taken towards actively protecting the marine ecosystems of the municipality of Medulin. The waters of western Istria, which cover the entire marine area of the municipality of Medulin, are the largest Natura 2000 site in Istria. According to the studies of 2014, the population of the bottlenose dolphin (Tursiops truncatus) at the southern tip of Istria numbers about 230 individuals. A high proportion of mothers with calves shows the importance of this area for all stages of the life of bottlenose dolphins, although this area is primarily used for feeding. In the coming years, the current state of the local population will be thoroughly assessed for the purpose of establishing the permanent monitoring of this animal which has always coexisted with humans. 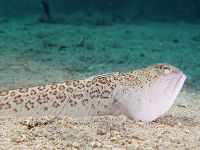 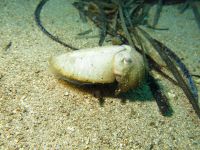 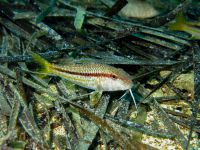