Kamenjak Through the Geological Past

Life appeared on Earth about 3.8 billion years ago and has since evolved into an innumerable number of species which amaze us time and again. Numerous fossil remains in the rocks are a time machine that takes us back to the Earth’s distant past, revealing its long-lost spaces and unusual inhabitants. One such exciting story is recorded in the grey-white limestone of Kamenjak, which had long been ruled by magnificent reptiles – dinosaurs.

Life in the Cretaceous

The limestone rocks of Kamenjak were formed by the deposition of limestone shells and the skeletons of extinct marine animals. Fossils can be found wherever the rocks are not covered in vegetation, so even a simple walk on the coast might be remembered for many discoveries along the way. Based on the fossils characteristic of certain periods, such as the foraminifera Broeckina balcanica, and other components of the microfossil community, the rocks are estimated to belong to the Cenomanian age (the late Cretaceous, 98–93 million years ago). At that time, the arrangement of the continents was already similar to the one we have today, and this area was covered by the Tethys Ocean. The climate was dry and warm, while lush tropical vegetation predominated on the mainland. There were many fern species, the gymnosperms stagnated, and the dicotyledons developed most among the angiosperms. It is assumed that present-day central and western Istria was a vast island, and the footprints found in the parts of Istria that were covered by the sea during that period suggest that animals moved freely there at low tide. While dinosaurs dominated the mainland, unusual rudist and oyster bivalves occupied the shallows. The finds of spiral shells of ammonites, an extinct group of cephalopods of the open sea, support the theory of the occasional deepening of the sea in the Kamenjak area. 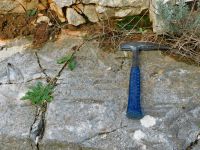 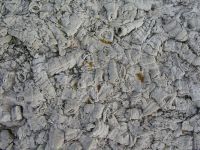 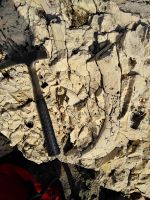 Among organisms with limestone skeletons that were able to fossilise, the most notable are extinct rudist and oyster bivalves whose related species still live today. Rudists had two valves, one in the shape of an elongated horn attached to the seabed and the other loose and partially attached as a lid. They lived in groups in warm seas, which is why today along the entire coastal area of Croatia we find rudist-bearing limestones in which their shells can be easily seen. Along the eastern coast of Kamenjak we find numerous rudist genera: Agripleura, Praeradiolites, Radiolites and Durania. Like rudists, oysters live attached to the seabed and thrive in warm, slightly brackish and calm seas. In the rocks, we find whole banks of fossilised oysters. On Kamenjak, two oyster genera have been found: Exogyra and Pycnodonte.

The Kamenjak Peninsula has great palaeontological importance due to the extremely rare dinosaur footprints found on the island of Fenoliga and Cape Grakalovac. It is estimated that there are about 150 footprints on Fenoliga. The footprints were discovered in 1975 by Slovenian biologist Matjaž Gogala and geologist Rajko Pavlovec. The site is specific because footprints of both carnivorous and herbivorous dinosaurs were found at the same place and because most of the footprints are grouped into tracks. On the basis of these footprints, it is possible to determine how the dinosaurs moved, their speed, size and even to gain an insight into their behaviour. The largest track, 19.5 m long, consists of 39 successive footprints of a four-legged animal. These circular-elliptical prints of 30–40 cm in size, on which traces of thick toes can be seen, were left by herbivorous dinosaurs – the sauropods. They had long necks, small heads and oval bodies. It is estimated that the sauropod on Kamenjak was 11 metres long, its head was at a height of 3 metres, and it weighed as much as 13 tons. The second type of footprints are the three-toed footprints of bipedal carnivorous dinosaurs – the theropods and ornithopods. The theropods, with sharp teeth and clawed “hands”, were the largest carnivores ever to have walked on Earth. Although most people associate the theropods with extinct predators (e.g. Tyrannosaurus rex), more recent studies have confirmed that dinosaurs still “live”, because today’s birds are probably descended from small, non-flying theropods. On Kamenjak, the theropods were smaller both in number and size than the sauropods. An average foot length of 15–20 cm suggests that the theropods here were only 3 metres long, 1.5 metres high and weighed 150 kg. Although the above-mentioned dinosaur groups cannot be accurately classified into narrower categories, it is assumed that the ornithopod Iguanodon and the theropod Megalosaurus inhabited Kamenjak.

The text was written in cooperation with the Green Istria Organisation 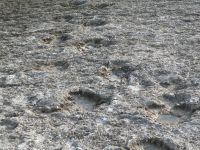 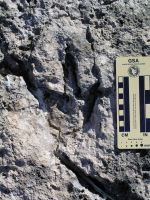