Pomer Bay is the most inward part of Medulin Bay located on the shores of the significant landscape of Upper Kamenjak. This unusually shallow area was created during the last Ice Age 10,000 years ago. It is surrounded by land on three sides, while a dam extends on the side overlooking Medulin Bay. The dam is entirely man-made to retain fish in the lagoon. The seawater can flow through in two places and tides are the main factor in determining the seawater level in the bay. Salinity may vary from brackish water to hypersalinity depending on precipitation, evaporation and the addition of fresh seawater from sea currents and storms, flooding of the sea in winter or tidal exchange. Due to extreme variations in the seawater temperature and salinity, the surface of this area can be completely frozen during strong bora wind episodes in winter.

Pomer Bay is an extremely significant area from a biological point of view. In addition to being a suitable place for the spawning of many fish species and the growth of juveniles, this habitat type is extremely rare even at the European level. Such habitats are typical of the Venetian Lagoon area, and many of the species encountered in Pomer Bay are not characteristic of the Croatian part of the Adriatic Coast, but precisely of the Venetian Lagoon area.

The whole area is included in the Natura 2000 network. Since it is extremely shallow with great variations in seawater temperature, salinity and volume, and physically separated from the rest of the sea, it is classified as a coastal lagoon. Among the many animal and plant species, the seagrass meadows of lesser Neptune grass (Cymodocea nodosa) are particularly prominent. The area is abundant in crustaceans, and also common are sea cucumbers, sea urchins, serpulid tubeworms, sponges, various cnidarians and a unique fish species, the Mediterranean killifish (Aphanius fasciatus), which has existed on Earth since the Tethys Ocean era.

The significance of this extremely shallow area is also indicated by the fact that it is home to species that inhabit different types of habitats (with a muddy bottom, sandy bottom, rocky bottom) and species that prefer different seawater depths.

A Shelter for Migratory Birds

Besides being rich in underwater life, this area is also significant for many bird species that find shelter and resting places here on their migratory route.

A coastal lagoon is a rare habitat type on the eastern Adriatic coast due to the configuration of the terrain. Like most low coastlines, this habitat is threatened by urbanisation, beach nourishment and pollution from solid or liquid waste. Therefore, all activities in the vicinity of these endangered habitats must be closely monitored and physical, chemical and biological parameters followed in order to determine negative changes in a timely manner. 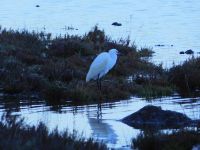