Small Inhabitants of Grasslands and the Temporary Pond

It is precisely because of the rich diversity of Punta’s flora that its fauna is equally rich. Although primarily important for rare and endangered plant species, the grasslands also support many smaller inhabitants, from tiny ants to large beetles. There are more than 50 species of butterflies, the most beautiful grassland dwellers, and some, such as the red admiral (Vanessa atalanta) and the painted lady (Vanessa cardui), come here every year all the way from Africa. In the area surrounding the Mediterranean temporary pond, but also throughout the Peninsula, especially around water bodies, the Odonata species of all sizes can be encountered: from the delicate spread-winged and narrow-winged damselflies in the immediate vicinity of the temporary pond to skimmers, darters and, of course, the emperor dragonfly (Anax imperator). 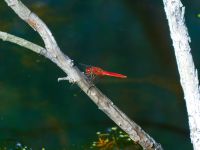 The dry Mediterranean climate is particularly favourable for reptiles such as the European legless lizard (Pseudopus apodus) or the eastern and western green lizard (Lacerta viridis/bilineata). Extremely abundant here throughout the whole year is the Italian wall lizard (Podarcis siculus). Such abundance of the Italian wall lizard species also attracts many snakes, especially the green whip snake (Hierophis viridiflavus carbonarius) and the Balkan whip snake (Hierophis gemonensis), which can often scare us, but there is no reason to worry since they are absolutely harmless.

The larger snake species of the area include the Aesculapian snake (Zamenis longissimus) and the four-lined snake (Elaphe quatorlineata). Both species exceed two metres in length but pose no threat at all to humans. 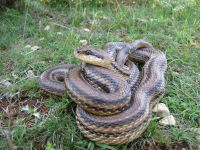 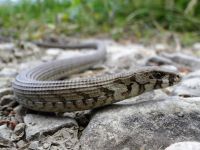 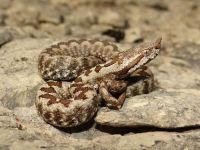 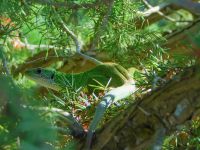 Throughout the Premantura Peninsula, and at all nearby sites as well, we can find two potentially dangerous animals: the Mediterranean black widow (Latrodectus tredecimguttatus) and the nose-horned viper (Vipera ammodytes). Although the bites of both venomous species are extremely painful, neither is necessarily deadly. It is important to be cautious when moving through zones of risk and not to disturb these species in the event of an encounter. Venomous animals would prefer to save their venom for their tasty prey, rather than waste it on a defensive bite. If a bite occurs, it is important to remain calm and seek medical attention urgently. 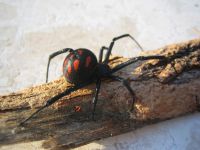 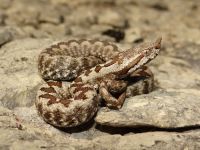